My Experience at the 2020 Grammys (Being the ‘Wife Of’ vs. the Music Promoter) 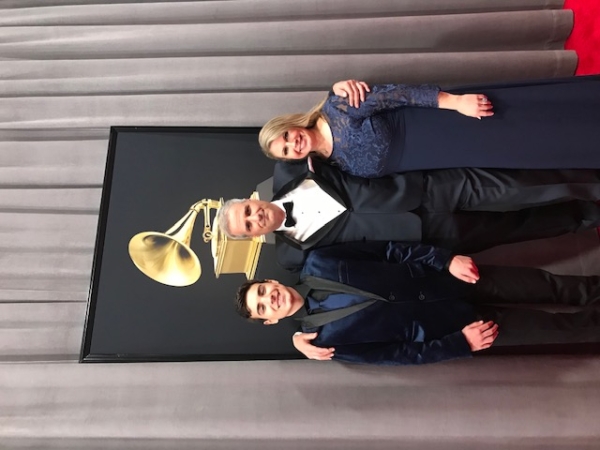 The Alexandrakis Family on the 62 Annual Grammy Awards Red Carpet

My Experience at the 2020 Grammys (Being the ‘Wife Of’ vs. the Music Promoter)

It has been a while since I have posted but it has been a very hectic six months and I am just now about to sit down and write this! On November 20, 2019, The Recording Academy announced their Grammy nominations, and I was THRILLED that THREE of my clients were nominated! My husband (YES!), Eric Alexandrakis for his Spoken World album, ’20 Years as a Two-Time Cancer Survivor’, Peter Kater (his 14th nomination) for his album, ‘Wings’ (New Age), and A Bad Think (Michael Marquart) for his album, ‘The Savior’ (Best Immersive Audio). From the moment the nominations were announced, it was whirlwind. I’ve had albums nominated before that I promoted but this time it was a little different because it was my husband and it definitely is a unique experience coming from the artist-side instead of the pure marketing side that I was accustomed to.

Eric thought that he had a good shot this year. I was hopeful but I also knew that anything could happen so I, as I always am, was cautiously optimistic. I fell asleep the night before in my kiddo’s bed because we were listening to audiobooks and I didn’t even have Grammy on the mind. I didn’t plan to wake up early to look at the nominations and didn’t stay up thinking about it as I have in the past. Around 6:30 AM, Eric came into the room and tapped me on the shoulder and said, “I got it!” I was like, “Got what?” It took a few seconds for it to register what he was talking about and then we woke up our son and we all jumped around and celebrated before we got our boy ready for school. What a fun morning that was! Immediately the emails, phone calls, etc. started and we tried to just get the kiddo off to school, take a breath, and then we dove in.

That day, I threw together a party for Eric with a few local friends and we celebrated! The next morning, I was up at 4:00 AM for surgery to fix a broken nose that I got from a ski accident earlier in the year. I got home around 3:00 PM and was in a lot of pain so to get my mind away from the discomfort, I worked for the next 30 hours straight. The outpouring from family, friends, business associates, etc. was heartwarming and we started to think about what the next steps were.

I had planned my surgery date carefully so I could recover over Thanksgiving weekend and then get back to work for a few weeks before we had a second break for the holidays. (I was also doing an online class from Harvard Business School to get a certificate in Disruptive Strategy, which I did finish.) All of that planned rest time changed and it ended up that we didn’t get a break at all. The second phase of Grammy push was hard and it is brutal. I also had fifteen holiday records I was promoting and a couple of regular projects so things were hectic. I was exhausted and ordered dresses online because I was too tired to go shopping but it all came together! We were very fortunate to get additional tickets to take our son, Eric’s parents, and siblings to the Grammys.

We left a week early so that we could attend various events and meetings and while exhausting, we had a blast! My favorite was the Nominee Party that the Recording Academy hosts because we got to see so many other friends (and they spared no expense on food, etc.) I liked the events at Soho House, they always have various showcases, etc. during the week leading up to the event. On the day of the Grammys, we got dressed up, met up with some friends and family, and headed to the first awards event (Premiere Ceremony, where they announce most of the winners before the telecasted show in the evening). The Grammys actually start around noon, as it’s an ALL day event. Michelle Obama ended up winning the Grammy in the Spoken Word category but it was SUCH an honor to get a nomination! Peter Kater won for Best New Age record (his second win!) and A Bad Think also didn’t get the Grammy but again, it’s such an honor just to get a nomination. Congratulations to all the nominees! The day of the Grammys was also the day Kobe Bryant passed away so there were big crowds gathering outside the Staples Center with mourners and fans.  It was a bit crazy with all the helicopters flying overhead, huge Billboards with Kobe Bryant, and the energy from the Grammys itself.

After the Premiere Ceremony, we went to the main building and walked the red carpet. What a blast that was! The Recording Academy issued A-level tickets for all three of us (Eric, my son, and myself) to walk the red carpet. Billie Eilish was in front of us and my son got to see some of his favorite artists (Lil Nas x, Ariana Grande, etc. etc. etc.). This was his first trip to LA and as a 13-year-old, he definitely was wide-eyed and FINALLY appreciated what his parents do day in and day out. Once, when he was in Kindergarten one of the parents (who later became a dear friend) said to me, “One day in class we were talking about parents going to work and we asked E. what his parents do. He said, ‘they don’t go to work, they just hang out at home all day.'” Wow, THAT’s embarrassing!) I think we scored some cool points with him (finally)!

So, we had a great time and when we returned home (side note: I brought home a stray cat from LA because…why not?), we were exhausted and it took a few weeks to get our mojo back. We were in the middle of planning the rest of the year and then, boom, Coronavirus. (Which, I will note I totally was aware and worried about this when we were at LAX that trip but that’s another story.)

It was a very different experience for me this year. Usually, I’ve been the one that my clients text from the audience so that I can send a press release out right away. I would never have been able to attend the events I got to go to as a marketing/publicist professional (even with my now 25+ years of marketing music) because it’s the artist and their plus one. It was so special and it was touching to get to see this unique perspective. I took in the experience and it also gave me ideas on how to help support my clients more through this very, VERY, overwhelming experience. I also want to note that the Recording Academy was stellar. Their events were so well done and they treated everyone like gold. Everyone I met who worked for the organization was kind, excited about the event, very supportive of the artists, and the people who work there genuinely loved music and the artists.

Congratulations again to the 2020 class of Grammy nominees and winners! Thanks also to Eric, for making a great album and making me his plus one! 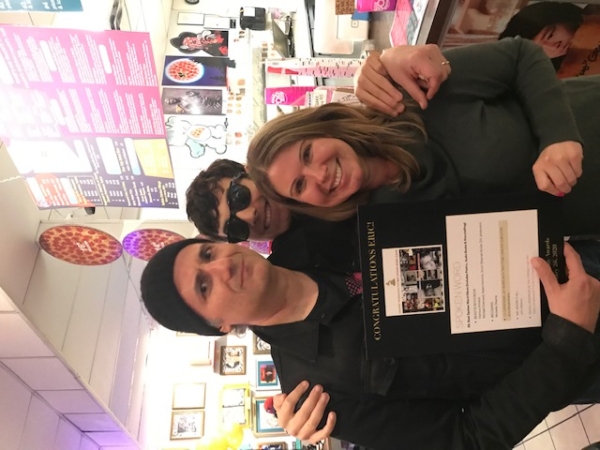 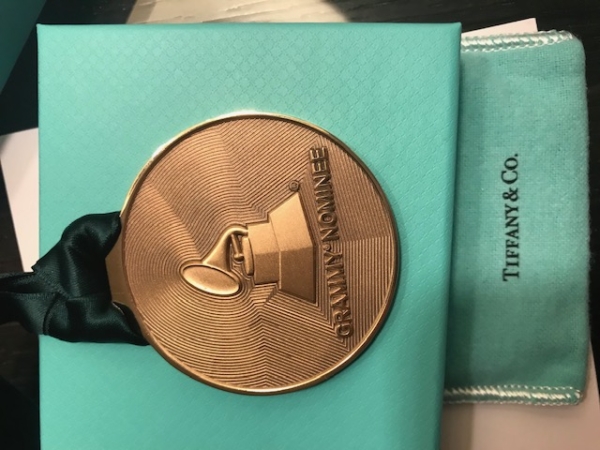 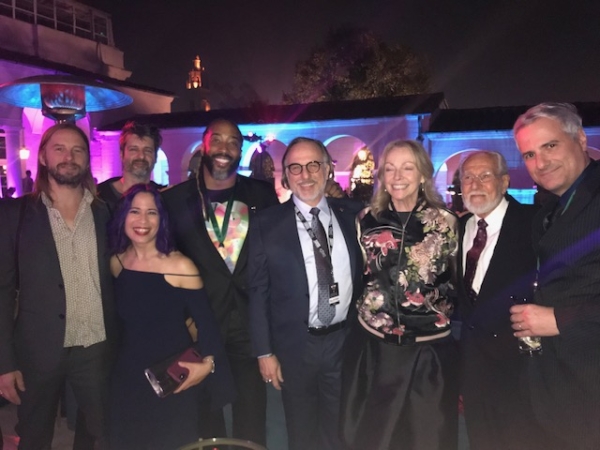 Music friends at the Nominee Party! (Photo by Amanda Alexandrakis) 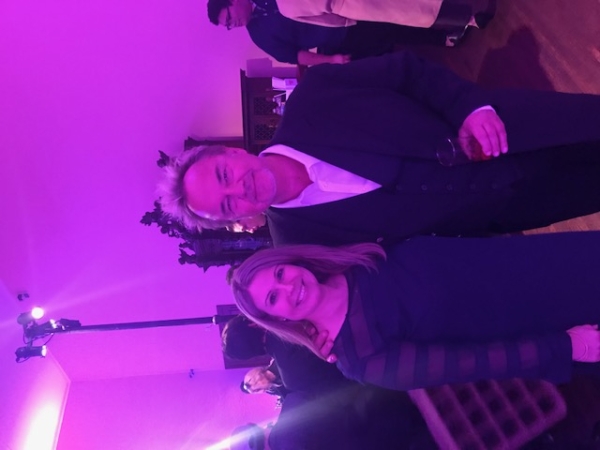 Peter Kater and I at the Nominee Party. 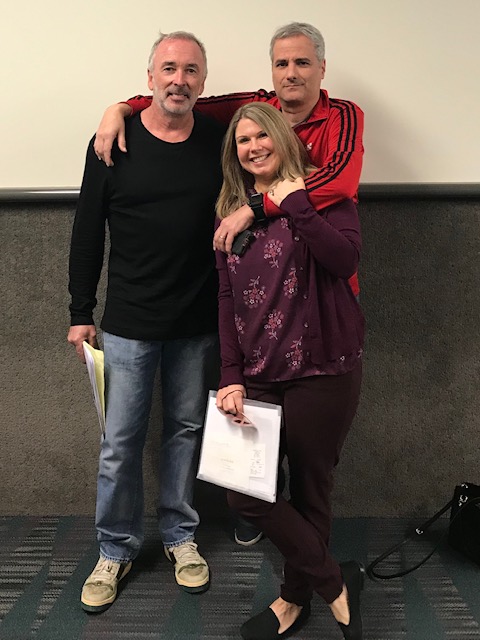 You run into a lot of people when you go to pick up tickets! Michael Marquart (nominee), Eric Alexandrakis (nominee), and myself. 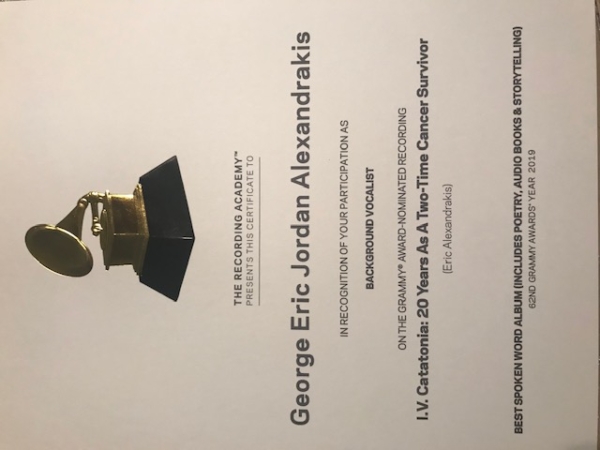 It was a family affair. Our son contributed to the back vocals and got a certificate too for his efforts! Not bad for a 13-year-old kid! (He goes by Eric and not George but we felt that may be a bit confusing so we used his entire name.) 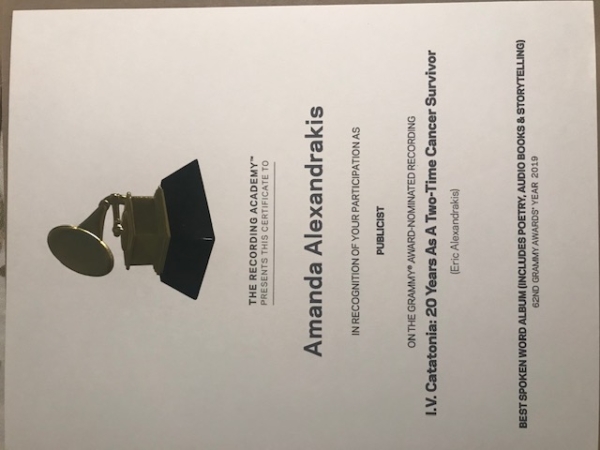 I consider myself a marketer but The Recording Academy considers it Publicity so… Close enough! 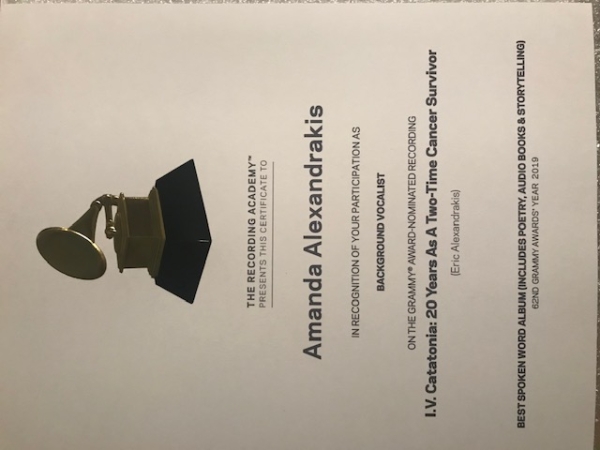 This is probably the one chance I will ever have to contribute to an actual recording on this level. What an honor!